The usual image of board games is of a sedentary pursuit, with players taking their time to decide their next move or roll some dice.  These games can be incredibly tactical and intense, but one thing that’s usually not associated with board games is adrenaline.

I’ve played two great games recently that are completely different from this, and I’m going to tell you what makes them awesome.  The games are Space Alert and Galaxy Trucker.  They are both designed by the same person, one Vlaada Chvátil, and they both include the element of real-time gameplay.

Space Alert is a co-operative game for four or five players.  You play the crew of a spaceship sent into hostile territory who must survive for ten minutes.  What makes this game different though is that those ten minutes are played out in real time, to an accompanying soundtrack CD.  Every minute or two the ship’s computer will call out a new threat that has to be dealt with, and as a team you have to work together to defeat each threat before it tears your ship apart. 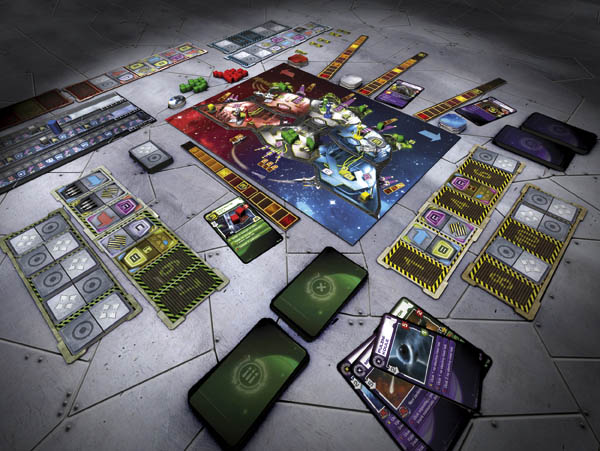 During those ten minutes you put down cards to plan out what your little crewman is going to do.  With each action you can move to a different room, or you can press the A, B or C button in each room which either fires the guns, powers up the shields, moves power to where it’s needed, or a few other special actions.  All players plan out their moves, but the move cards are placed face down so nobody can see what anyone else is doing – you have to talk to each other to make sure all threats are being dealt with.

Finally, after the ten minutes are up, there is the “action replay” phase.  Each player turns over their action cards and replays on the board what actually happened.  If all went well and the team played as a cohesive whole then a whole pile of alien spaceships will appear and be blown away by coordinated volleys of laser fire, and you can congratulate yourselves on a job well done.  More often than not though one player will be pressing the fire button on the main laser but nothing will happen because someone else drained the batteries to power up the shields and nobody remembered to throw more fuel into the reactor and the missiles were fired too early and the target was out of range and…  and it’s just funny to watch what you thought was a bulletproof plan fall to pieces as your ship does likewise!

Playing this game is completely unlike playing any other game.  You will experience ten minutes of pumping adrenaline, shouting and panic as five people all try to coordinate their actions against the clock.  Make a mistake, lose track of what room you thought you were in, press the fire button at the wrong time and the whole carefully laid plan can fall down around you.  Everyone is relying on you, and you are relying on everyone else.  But each game only takes around 20 minutes, so if you fail horribly (and you will), just get back up and try again.

I love Galaxy Trucker.  It’s very high on my list of “Games to try with people who don’t play board games”.  The premise is simple: build a spaceship out of junk and fly it to the other side of the galaxy, and hope it makes it in one piece.

This is another game of two halves, one frantic half against the clock and a more sedate resolution phase.  The best bit is building your spaceship.  Each player has a board with squares on in the rough shape of a spaceship.  In the middle of the table is a pile of face-down square tiles.  Each of these tiles is a ship component (such as an engine, laser or crew compartment), and each has different shaped connectors on each edge.  You build a ship by taking a tile, looking at it, and then either connecting it to an existing compatible connector on your ship, or placing it back on the pile face-up.  But, there is no turn-taking.  Everyone plays are once, grabbing pieces, looking at them, and deciding whether to attach them or put them back on the table. 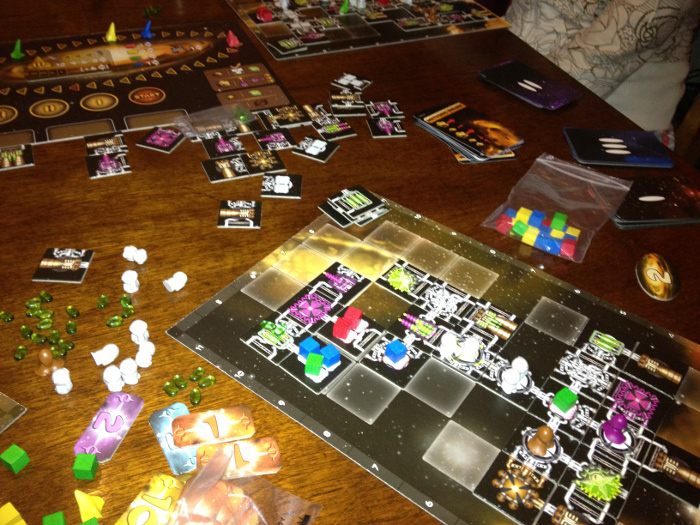 What you’ll get is a mad dash as everyone grabs components looking for the best bits for their ship.  But as you’re taking new tiles you have to keep an eye on what’s being thrown back, in case it’s that battery with the awkard connectors you’ve been looking for.  As the tiles start to run out the panic can set in as you realise you still need to find shields or engines and you just can’t get them.

It’s all so tactile, and the few rules about how components fit together are pretty simple and all make sense.  It’ll take five minutes to explain the basics to new players before they’re building their first ships, and this is what makes it so approachable for novices.

After the building phase there is a simple adventure phase, where random event cards are used to throw asteroids, pirates and planets full of loot at the players.  Bits fall off the ships when they’re hit, and there is great comedy potential as you watch a lucky asteroid hit cleave your friend’s precarious construction in half before it limps to the destination with nothing but a crew compartment attached to an engine.  But nobody minds because the whole thing is over in 20 minutes again so you just move up to a bigger and better ship and try again.

So, Space Alert and Galaxy Trucker are two of the most fun games I’ve played recently, and I don’t think that it’s a coincidence that both involve real-time gameplay.  I appreciate a complex strategy game as much as the next geek, but playing these games scratches a different itch and comes much closer to what we think of as playing in the traditional sense.