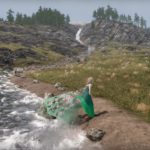 It’s been a while. Turns out that having a child takes up a lot of your free time. Who knew.

It’s a tricky balancing act with children and technology. Too much screen time is bad, but they need to learn to use technology and feel comfortable with it. Being from a tech background, I often wonder if we were more conscious of this and a bit too strict (somewhat hypocritically, thinking back to my own youth…).

Everything is touch screens these days. Direct control is so much easier than indirect control, so I wanted to make sure that my daughter had some practice with a controller. Time to get back to Unity and make something!

I did a couple of simple 2D games early on (I’ll share them later), but I wanted to try something in 3D. My daughter loves Disney and Frozen, and after a quick Google I found some passable Elsa and Anna models (3D modelling is definitely not in my skill-set). After a quick proof of concept and a bit of research, the Unity Black Friday sale was upon me and I went all-in with a bunch of the popular tools. I may follow up with a technical post later.

The only slight hiccup is that we have another child due any time now, and nothing is going to get done for a few months afterwards. So this is what I’ve come up with so far:

There’s no real gameplay there, but my daughter always prefers to play in a sandbox than be told what to do, so running around and exploring is fine. You can summon snowmen, push them around, throw snowballs at things and cast magic at wolves to scare them off. I could spend hours more detailing the world and adding areas things (there’s loads of black areas), but I think it looks pretty cool so far.

Obviously the game will never be finished or distributed as they’re not my characters, but it also has the advantage that it only has to run well on my own beefy gaming PC so I don’t have to waste limited time on performance and optimisation!

Thinking about games for children in general, every child is so different that it’s really hard to find anything ideal off-the-shelf. They’re either too complex, or too simple, or require reading skills, or the theme isn’t interesting. Which is why I just make my own games, which can become more complex as my daughter grows up. And most importantly she can see how things are made and give ideas and suggestions about what to add, and see me make changes in real-time. Much better than games being some mysterious black box (I realise I’m lucky in being able to do this). If my kids are going to be gamers, they might as well start with early-access, moddable PC gaming! Much closer to the Spectrum scene I grew up with.

Co-op mode is the best thing ever in gaming. It’s the ideal way to share a game with your family, and done well it can let an adult handle the complicated bits while the child does what they can.

This fit really naturally with a Frozen game, with two main characters. It’s not really in the video (because I recorded it myself and using two pads at once is hard) but one pad controls Elsa, and one controls Anna. Both pads can control the camera, so the child doesn’t have to. If there’s no input on a pad for five seconds, that player drops back to AI mode (they just follow you around for now) and the camera focuses on the active player. Any input will put them back under player control and the camera will keep them both in view. No rules around this, no complicated explicit join/drop-out mechanics, it ‘just works’. I’ll definitely be keeping this concept for future games.

4 Responses to “Frozen game for a 4-year-old”