It’s been a while since the last post, mainly because I’ve had two LAN parties in the last two weeks and getting my first Unity game prototype into a playable state has taken priority. But more about that one later. In the meantime, here is a prototype I made at the end of last year (complete with terrible programmer art).

Each player has an end zone area in their colour, and the idea is to place mirrors to direct as many of the beams into your zone as possible. You get points whenever the beams are going into your zone, and you can place bombs on other players’ mirrors to blow them up a few seconds later. First to 100 points wins. Here’s a three-player game:

Turns out that after playing it a few times, it’s not that fun. There is too much going on with mirrors popping up and disappearing all over the place, so beams change path unpredictably making it hard to plan anything. Originally there was limit to how often you could place mirrors or bombs, and the game became a manic click-fest. I then added a slight cooldown between clicks, but that was a bit frustrating.

The prototype was written completely from scratch in C++, apart from using ENet to make the networking side a bit easier. The reason for starting from scratch was purely that I wanted to have made some kind of playable game in this way, which I managed (but Unity is definitely the way forward from now on). 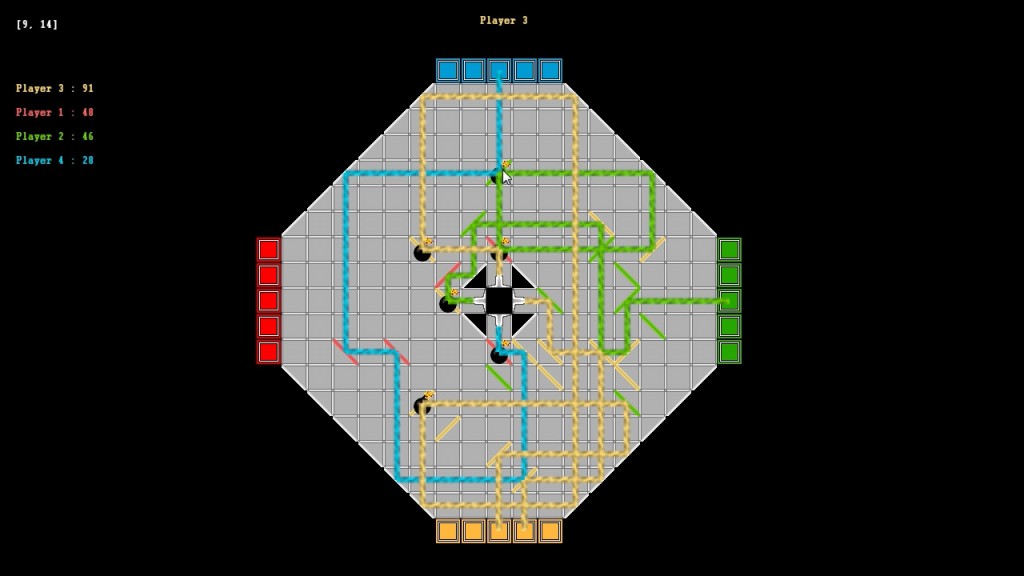 For the networking side of things I went pure server-authoritative to ensure there were no sync issues, and as a result it’s been almost entirely bug free. The client didn’t even know which player it was until near the end of development – it simply sends mouse clicks to the server, and the server sends back all the tile state updates. This is even the case when playing single player – the client and server run in the same process, and all communication goes through the network. This is a model I’m sticking with for all prototyping, because it means that if it works in single player it’s almost guaranteed to work multiplayer, which is makes debugging and testing much easier.